A local netball team in the Premier Division of Rossendale Ladies League has secured a new kit sponsor in DocTech, a Bury based firm providing document management solutions.

The team, who recently changed their name to DocTech in recognition of the new sponsorship, has been in existence for more than 30 years, with three founding members still playing today. The league is open to females aged 14 and over, with the team ranging in age from 29 to 50+.  The league is made up of mums, daughters and aunties who love that their love of netball has kept them close over the years.

Sharon Kempson, DocTech team captain “The team really appreciate DocTech’s support in sponsoring us. To go on court in brand new shiny kits feels really good. We had some very admiring glances when we stepped on court for the first time in the dresses! We had our previous kit for over five years, but as we pay all our fees each game, it’s something we put off unless we have a sponsor.  We have had people asking us who DocTech are, so we have had to make sure we understand the solutions they offer!”

The league runs all year round and holds its matches at The Adrenaline Centre in Haslingden.

Ruban Rajasooriyar, DocTech’s Managing Director said “We have planned to do more in the local community for some time, so when we heard a team sponsor was needed, we were happy to get involved.  With many keen sports players and gym enthusiasts in the office, supporting a local team seemed a natural fit.” 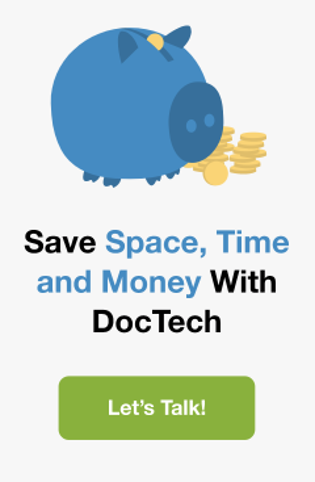 DocuWare is the perfect system for keeping track of all your Human Resources (HR) documents. For a smooth introduction into managing digital personnel records, we have compiled 7 professional tips. They help ensure a ...

DocTech Named as a Supplier on Crown Commercial Service

Bury firm DocTech have been named as a supplier on Crown Commercial Service’s (CCS) Cloud Software framework. Through this framework, public sector customers can buy software applications that are accessed over the internet ...